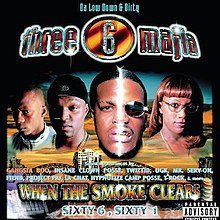 When the Smoke Clears: Sixty 6, Sixty 1 is the fourth studio album by American hip hop group Three 6 Mafia. The album was released on June 13, 2000, by Loud with Hypnotize Minds Records. The album was certified Platinum by the RIAA (Recording Industry Association of America) for selling 1,000,000 copies on December 1, 2000. The album bolstered the group’s popularity immensely, and contains some of Three 6 Mafia’s most well known tracks, such as “Sippin’ on Some Syrup” “Who Run It” and “I’m So Hi”.[2] The album was the last project featuring all of the original group’s members, as Gangsta Boo and Koopsta Knicca left after the album’s release.[3]