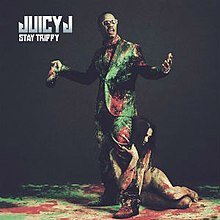 Stay Trippy is the third solo studio album by American rapper Juicy J. The album was released on August 23, 2013, by Kemosabe Records and Columbia Records. The album was Juicy J’s first solo album since distancing himself from Three 6 Mafia and joining Wiz Khalifa‘s Taylor Gang Records, who makes three appearances on the album.

Stay Trippy was met with generally positive reviews from critics. The album debuted at number four on the US Billboard 200, selling 64,000 copies in the United States during its first week. As of November 6, 2013, the album has sold 138,000 copies according to Nielsen SoundScan. The album was supported by four official singles, the certified platinum “Bandz a Make Her Dance“, “Show Out“, “Bounce It” and “Talkin’ Bout”. The first three charted on the US Billboard Hot 100. He also went on the Stay Trippy Tour with ASAP Ferg beginning on April 20, 2013, till September 2013.