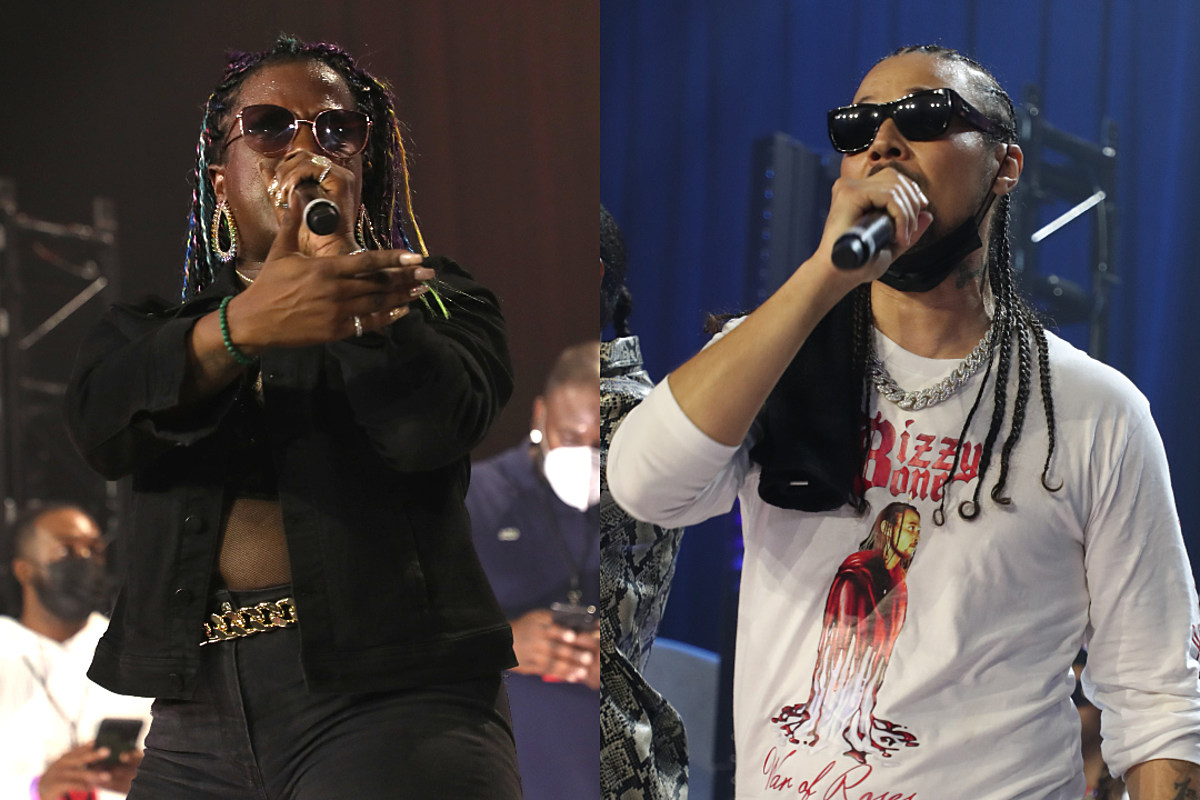 The fight between Three 6 Mafia and Bone Thugs-N-Harmony during their recent Verzuz hits battle had the internet going nuts on earlier this week. Now, people are saying Mafia member Gangsta Boo took it too far when she was talking about Bizzy Bone‘s mental state during the scrap.

On Friday (Dec. 3), tweets started to roll in that chastised Boo for saying Bizzy’s outburst on Thursday night (Dec. 2), which led to the short brawl during Verzuz, was due to the Cleveland rapper not taking his meds.

“Gangsta Boo is really gross as fuck for saying all that shit,” one person tweeted. “Bizzy has been very transparent about the shit he endured as a child and it’s fucked up that she would throw it back in his face like this. She need her ass whooped.”

The Memphis rapper caught wind of the tweet and responded on Twitter. “Bitch please. We all have a sad story. Cry me a river,” Boo replied.

Another Twitter user called out Boo’s use of the term “sissy” when referring to Bizzy during the heat of the fight. “All Ima say is Gangsta Boo wrong for calling Bizzy Bone a sissy. That man was abused at a very young age. That shit is sad,” the person tweeted.

Boo also rebutted this poster on Twitter. “So was I!” the rapper shot back in a tweet. “That’s how we talk in MEMPHIS!! IM NOT STOPPING HOW I SPEAK FOR THE WEAK! DONT THROW ROCKS FROM A GLASS HOUSE. TTYL”

Boo also responded to a tweeter who questioned whether the “Where Dem Dollas At?” rapper should be canceled. “You live in internet land fr huh?” the Three 6 member replied.

She later added, “[Bizzy’s] trauma was the last thing on my mind. Still is. I was thinking about the show being stopped over him being emo. My bad. I’m in my bag. Not feelings.”

The anticipated Three 6 Mafia and Bone Thugs Verzuz hits battle was going off without a hitch until Bizzy appeared to get agitated by DJ Paul and Gangsta Boo slow dancing while Bone performed “Buddah Lovers” during the fourth round. “Before we even get started, you ugly muthafuckas not gon’ be mocking me when I’m on this muthafuckin’ stage,” Bizzy snapped. “Like straight the fuck up.”

Bizzy was starting to address Gangsta Boo when Juicy J shot back, “Nigga, suck my dick.” Bizzy then threw a bottle of water in Gangsta Boo’s direction, which sparked a short-lived fight between the crews in the middle of the stage. In the heat of the moment, Gangsta Boo yelled some nasty statements about Bizzy.

“Bizzy Bone, you a hater. You must ain’t take your pills,” she blurted. “You weirdo-ass nigga. Fuck is wrong with you? Bitch-ass nigga. Bizzy Bone a hater. Sissy-ass nigga.”

Following a brief intermission, the groups returned to the stage to perform sans Bizzy. Bizzy later returned to the stage and apologized for disrupting the function. The following day, he posted a lengthy apology on Instagram. “I feel as a man there is a time to apologize and be the bigger person,” the Cleveland rapper began. “Even if you do not feel wrong. @melyssa_lp @triller @verzuztv thank you for everything. But when u a man you understand there is a time to be the bigger person. Mistakes will be made. This is Hip Hop , if we was posed to be perfect then we wouldn’t even be here – @therealswizzz (yes Swizz needed to be called and spoken to as well , even though he told me it was ok. Ol beautiful nigga.) When i got back on stage i meant what i said.”

He continued: “I really hope you guys understand my passion for music and my seriousness about GOD. I really believe in what i say. Im a artist. I came back because i know a lot of people depended on me. It was not scripted but it ended perfect. A toast to Hip Hop. Sht gets a lil crazy sometimes. @juicyj @djpaulkom @missyeahoe @realcrunchyblack #ripkoopstanicca #riplordinfamous hopefully i gave you enough hell to know what HEAVEN can be like. You guys did a HECK of a job and embracing me after that took class as well. This is real. I am real. God bless you all.”

Bizzy has been open about his struggles with overcoming suffering though a traumatic childhood in which he was kidnapped and sexually abused. The Bone Thugs member released his latest album, War of Roses……, in September.

Pusha-T and Drake, YG and 6ix9ine, and more.